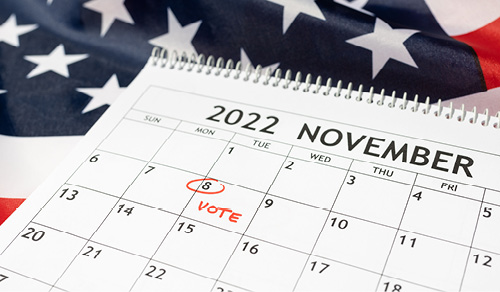 Ohio Republicans enjoyed another strong night, sweeping all the statewide races, including all three Ohio Supreme Court races, and increasing the veto-proof majorities in the General Assembly. However, Democrats won two swing congressional districts. Overall, the Buckeye State, once considered a swing state, remains a reliable Republican stronghold continuing a trend stretching back to 2010.

Below is Bricker & Eckler’s Government Relations Practice Group’s overview of the preliminary 2022 General Election results and details on races of particular interest.

As mentioned above, Governor Mike DeWine (R) easily won his reelection campaign, alongside Lt. Governor Husted, against former Dayton mayor Nan Whaley (D).  Ohio and national media outlets called the race shortly after the polls closed at 7:30 p.m.. Governor DeWine now turns to preparing his next state budget proposal, which will be unveiled early in 2023.

The 2022 election is the first General Election where Ohio Supreme Court candidates appeared on the ballot with their partisan affiliation. Justice Sharon Kennedy (R) and Justice Jennifer Brunner (D) squared off for the Chief Justice role on the Ohio Supreme Court. Current Chief Justice Maureen O’Connor could not run for re-election due to the judicial age limit in Ohio’s Constitution. Justice Pat DeWine (R) ran for re-election against First District Court of Appeals Judge Marilyn Zayas (D) and Justice Pat Fischer (R) sought re-election to the court against Tenth District Court of Appeals Judge Terri Jamison (D). In the end, all three Republican Justices prevailed.

When Justice Kennedy becomes Chief Justice in January 2023, Governor DeWine will appoint a replacement to finish her current term. With the sweep, Republicans continue holding their majority on the state’s high court.

B. U.S. House of Representatives

Most of Ohio’s incumbent Members of Congress were successful in their re-election campaigns. Ohio’s Congressional races provided one of the bright spots for the state’s Democrats. Congresswoman Mary Kaptur (D-Toledo) survived a challenge to her seat in Ohio’s 9th Congressional district, becoming the longest-serving female member of Congress in history.

The 9th Congressional District saw some of the highest outside spending in the country, reflecting the importance of Ohio’s congressional races for both national parties and overall control of the U.S. House of Representatives. Former Ohio House Minority Leader Emilia Sykes (D- Akron) defeated Madison Gesiotto Gilbert (R- North Canton), capturing the Akron area seat.
Finally, Cincinnati City Council Member Greg Landsman (D-Cincinnati) pulled off an upset, defeating incumbent Congressman Steve Chabot (R-Cincinnati) in Ohio’s 1st Congressional District. Nationally, it appears Republicans may earn enough seats to flip the chamber to their control, but with a smaller margin than originally forecasted, and votes are still being counted nationally in a variety of U.S. House races in other states.

A. Ohio House of Representatives: Overview

With both Democrat and Republican incumbent members running in new districts than in 2020 due to recent Ohio redistricting efforts, election watchers were ready for the possibility of some surprise results. However, it appears only two incumbents were defeated. As of the writing of this memo, House Assistant Minority Leader Thomas West (D-Canton) appeared headed for defeat, losing to Republican Jim Thomas.

If Santucci’s lead holds, he will flip the 64th District in Mahoning County, a seat currently held by term-limited Democrat Rep. Michael O’Brien.  Pending recounts and the official canvass, it appears Republicans might hold 68 of the chamber’s 99 seats, increasing their veto-proof supermajority.  Two Senate members will become members of the House in 2023 – Senators Bob Peterson (R-Washington Court House) and Cecil Thomas (D-Cincinnati).

The Ohio House majority caucus now shifts its focus to selecting a new Speaker of the House. Current House Speaker Bob Cupp (R- Lima) is term-limited. The Republican caucus will select its new leader, who will ascend to the dais in January 2023, in a closed caucus meeting on November 17, 2022.

(Preliminary election winners are in bold. Races that are too close to call are marked in Italics.)

(Preliminary election winners are in bold.)

(Preliminary election winners are in bold.)

V. STATE BOARD OF EDUCATION CANDIDATES

Five of eleven seats on the State Board of Education were up in the 2022 general election.

Similarly, the Ohio House and Ohio Senate took exception with some Ohio municipalities that attempted to allow non-U.S. citizens to vote on certain local-level election matters. Issue 2 enshrines in the Ohio Constitution a prohibition on local government from enabling non-citizens to vote in municipal elections.

The race to succeed Cuyahoga County (Cleveland, Ohio) Executive Armond Budish ended with Chris Ronayne (D) defeating challenger Lee Weingart (R). Ronayne previously served as Chief of Staff and Chief Development Officer in the City of Cleveland, and most recently was the President of University Circle Inc., which is a nonprofit community service corporation.

Ohio’s school districts saw an increase in the percentage of school levies passing. Overall, 87 of 120  (73 percent) passed. In 2020, 67 percent of K-12 tax levies passed. For ballot measures seeking new funding the results were more mixed, with only 46 percent passing. Renewal levies passed at a 91 percent clip. Levies and bond issues in Columbus, Worthington City Schools, Kettering and Pickerington passed, while a levy in Parma failed and Xenia is too close to call.

Overall, November 8, 2022, was a very strong night for Ohio Republicans who continue control of Executive and Administrative branches, the Ohio General Assembly, and the Ohio Supreme Court.  Now, all eyes will focus on the Ohio legislature which returns soon for “lame duck” session and to close out the 134th General Assembly.  “Lame duck” usually features a flourish of activity as legislators attempt to finish final legislative work before the General Assembly ends just before Christmas.  Given the large legislative majorities returning in January 2023 for the 135th General Assembly and the overall “clean sweep” by Ohio Republicans in the statewide election, it will be interesting to watch what legislative priorities rise to the level of demanding completion in 2022 or those that will simply be held over and introduced again once the new General Assembly begins next year.

As mentioned above, the Ohio House will have new leadership in 2023 when current Speaker Bob Cupp (R- Lima) leaves due to term limits. Governor DeWine and legislators are already beginning planning for the state’s next two-year state budget, expending additional federal ARPA and infrastructure funding, while possibly considering spending constraints due to inflation-fueled worries about a recession. All in all, 2023 is already appearing to have a full agenda.

As results of the November 8, 2022, general election are finalized, we will update you with developments and final results. Until then, if you have questions or would like more information on any of the races outlined above, please feel free to reach out to any member of our Government Relations group.

[1] * denotes an incumbent member of Congress.

This is for informational purposes only. It is not intended to be legal advice and does not create or imply an attorney-client relationship.